The Young and the Restless Wiki
Register
Don't have an account?
Sign In
Advertisement
in: Former Recurring, Rosales Family

Adrian Rosales is the estranged father of Rey, Arturo, and Lola. He is portrayed by Jay Montalvo and was introduced in August 2019.

Adrian Rosales was the father of Lola, Rey, and Arturo. He left his family when Lola was just a baby, leaving Rey to parent his siblings on Adrian’s behalf. Years later, Adrian and Celeste reconnected, but then broke up again. Adrian wanted to come to Lola’s wedding to Kyle Abbott, but Celeste told him it was Lola’s decision. Adrian wrote Lola a heartfelt better begging to be invited, but Lola never responded.

In August 2019, Adrian shows up uninvited to the wedding. At first, he just peeked behind the curtains, but Celeste caught him and he was confronted by her and his sons, who refused to let him have anything to do with Lola and them. Adrian told them they should let Lola decide if she wants to see him. They agreed to let Lola know and decide for herself, but were secretly plotting to get rid of him without her knowing. Lola became suspicious of their behaviour and followed them where she found Adrian.

Lola was upset that Adrian had ignored her wishes by attending the wedding anyways. She didn't want to make a scene though, so she allowed him to stay. After the wedding, Adrian stayed in Genoa City for a few days. Rey witnessed him hitting on Sharon, which disturbed him greatly. He and Rey almost got into a fight, but Celeste swooped in at the last second to break them up. Adrian tried to talk Celeste into giving him another chance, but she'd had enough of his empty promises. Adrian then left town, since there was nothing left for him there.

About 2 months later, Adrian showed up at Lola and Kyle's apartment. He convinced Kyle to give him some money without Lola knowing about it. Later, at the Grand Phoenix, Adrian ran into Theo Vanderway, who pumped him for information on Lola. Adrian told him about what he knew, which wasn't much. Kyle and Lola were angry that Adrian was using the money they gave him to buy drinks in the lobby. He even fled from the hotel without paying what he owed. Rey offered to pay the bill and track him down for Abby, but she let the matter go. Abby didn't want Rey to feel responsible for his father's actions. 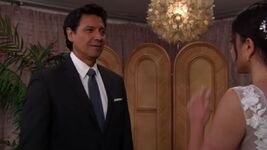 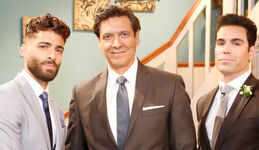