Amanda Sinclair is a lawyer who appears on The Young and the Restless. She is portrayed by Mishael Morgan, who is also known for her role as Hilary Curtis.

Amanda Sinclair was allegedly hired by Chance Chancellor to contest Katherine Chancellor's will. Devon Hamilton searched for information about Amanda, but couldn't find any photos of her, so he was shocked to see Amanda as she was identical to his deceased wife Hilary Curtis Amanda soon became a pariah in Genoa City because of how much she was hurting Devon.

Amanda insisted she was just doing her job, but she did make an offhand comment that she never should have left that old jerk get her involved in this. Devon's girlfriend Elena Dawson was Amanda's biggest detractor, believing she was well aware of how much she was hurting Devon.

Everyone was shocked when the new will bequeathed the bulk of Katherine's estate to Cane Ashby. It was eventually discovered that Cane's father Colin Atkinson was behind the will being contested, especially when Chance actually came to town and denied hiring Amanda. When Nate Hastings was in trouble with the medical board for faking Victor's death, he hired Amanda, who helped him retain his license. Nate quickly came to like Amanda and was cordial with her, much to Elena's ire, who still didn't like or trust her. 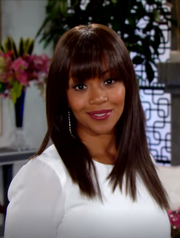 Add a photo to this gallery
Retrieved from "https://theyoungandtherestless.fandom.com/wiki/Amanda_Sinclair?oldid=54770"
Community content is available under CC-BY-SA unless otherwise noted.