Jeffrey "Jeff" Bardwell is a fictional character on The Young and the Restless, portrayed by Ted Shackelford.

Will passed away after a stroke. Jeffrey first arrived in town for his brother's wake and quickly set about blackmailing his brother's widow, Gloria Abbott Bardwell, to marry him so that he could inherit his brother's fortune which now belonged to Gloria.

Jeffrey was also trying to solve the Jabot Cosmetics tainted face cream mystery since Will had mailed him some "evidence". Though Jeffrey and Gloria's marriage was in name only, real emotions did occasionally boil over. Gloria ended up falling for Jeffrey, said blackmailing twin!

In April 2008, Gloria and Jeffrey were on the verge of a divorce but Jeffrey wanted half of Gloria's assets in the settlement. However, Gloria was giving half away to charitable causes.

In June, after Gloria ended up in jail for the murder of Emma Gibson, Jeffrey ran into Jack Abbott at the Genoa City Athletic Club and asked the junior Abbott to give Gloria a place to live now that she was all penniless and such. Jack wondered what Bardwell meant. Shortly after that Jeffrey divorced Gloria. Michael Baldwin ran into Jeffrey at the GCAC and punched him. Jeffrey and Jill Abbott showed up at Crimson Lights while Gloria was working the counter.

They humiliated her and demanded hot coffee. Gloria put jalapeno hot sauce in their cups and served it up. Unfortunately, Jeffrey was allergic to peppers and went into anaphylactic shock. Jill accused Gloria of attempted murder and told Kevin Fisher she was going to have his place shut down.

The doctor told Jill that Jeffrey was improving. She saw Gloria and informed her that Jeffrey was in critical condition. Michael arrived and dragged his hysterical mother out of the hospital. Jeffrey wrote a note to Gloria telling her that facing death made him realize how much he loves her. Jill took Jeffrey home with her and he was disheartened that Gloria hadn’t come to see him. He read the mushy note he wrote her and tore it up. Esther Valentine watched him put the pieces in his coat pocket.

When Gloria feigned ignorance, Jill bluffed that Jeffrey told her everything on his deathbed. “You’re lying! He swore he’d never tell another another soul…he promised me!” Gloria wailed. Jeffrey came downstairs. “How could you?” she sobbed. “I let you humiliate me, I gave you all my money…do you need to destroy me that much?” Gloria ran from the mansion. Jeffrey and Gloria reconciled. Jill urged Jeffrey to tell her what was going on so she could help Gloria.

Katherine Chancellor cited Jill's preoccupation with Jeffrey for having taken the reins of Chancellor Industries from Jill. Mockingly, Jill thanked Kay for doing her job and insisted that she was no longer concerned about Jeffrey. Kay reminded Jill that she had recently been too obsessed with her sex life to tackle CI, which Kay added, was still her company. After Kay claimed that Jill was jealous because Gloria had snagged Jeffrey, Jill reminded her mother (at the time) that something was wrong with Gloria and Jeffrey's relationship.

Kay warned, "Stay out of it. For some reason, you think there's some big secret." Jill responded, "There is. Jeffrey said something odd when Gloria spiked his drink and tried to kill him. He said that she'd done something like that before."

Gloria wanted Jeffrey to help her scheme to get back on top at Jabot Cosmetics since she lost her job and was reduced to Jill's assistant. Jeffrey said that they should buy stock so that they became the major stockholders of the company. In the Abbott's dining room, Gloria and Jeffrey gathered her brood for a discussion. Jack was not amused to find Gloria entertaining her family in his home, but he reluctantly obliged. After Jack left, Kevin learned that Gloria and Jeffrey had remarried. Kevin thought Jeffrey was blackmailing his mother again, but Gloria explained that her marriage was "for real" this time.

Lauren worried about legalities, but Jeff pointed out "they" would stop Gloria if it was known that she was behind the purchase. Gloria spitefully rolled her eyes and declared, "So we need to do it before they know what hit 'em. And then Jill can take her telephone and her reception desk and stick it where the sun don't shine." When Jeff asked about Michael's fee for setting up the dummy corporation, Michael demanded that Jeffrey hand over the cream Gloria had tainted. Jeffrey insisted that he would never again hurt Gloria or her family, but Michael ordered Jeffrey to fetch the cream.

Jeff left, but when he returned, he reported that the cream was missing from the safe in his room at the Club. Michael gritted his teeth and furrowed his brow in frustration, but Jeff claimed that someone must have taken the cream. Agreeing Lovers was an offshore corporation that Jeffrey founded in the Cayman Islands during the summer of 2008 for his wife, Gloria Bardwell. Jill, Gloria and Jeffrey invested in a bank in which Victor Newman had also invested. Victor pulled his money out , the bank went down and now Jill (unemployed), Gloria and Jeffrey were broke, blamed Victor and wanted their money back.

Later that same month, Gloria and Jeffrey eloped. Gloria was stunned and thrilled to see Little Richard as she entered a Las Vegas wedding chapel with her once and future husband, Jeffrey.

Alistair Wallingford was a drinking Scottish actor who looked exactly like John Abbott, Gloria's deceased husband. Sharon Newman and Jack Abbott hired him to spook Gloria and enlisted Jeffrey to help. Alistair developed a soft spot for Gloria and left town to do a play. Victor paid Jeffrey and Gloria to catch Colleen Carlton in a compromising position so she could be kicked off the Newman Enterprises board. They succeeded by paying a bartender to get her drunk and recorded her flashing her breasts in public.

Jeffrey and Gloria tricked Patty Williams into coming with them and then ransomed her off to both Victor and Jack.

In 2010, Jeffrey bought Indigo as a gift for Gloria. They renamed it Gloworm. In October, 2010, Jeffrey and Kevin started running money for Mark Hogan, a notorious mobster. Mark showed up at Gloworm demanding his money from Jeffrey. Mark warned Jeffrey that if Kevin sang to the police, it would be bad for him and even worse for Jeffrey.

In 2012, Jeffrey and Gloria get married again, but their bliss is disturbed by someone named Chelsea Lawson, who claims to be his daughter. Jeffrey denies it and begins to wonder if his brother William was the father. That, however, is proven false by a paternity test, proving that Chelsea is his daughter. Jeffrey's past then seriously catches up to him when Chelsea's mother Anita shows up, reminding him that they are still married despite having been separated for many years. Jeffrey is devastated because it now means that his marriage to Gloria, whom he truly loves, is invalid.

Overtime, Jeffrey starts to embrace Chelsea as his daughter. He mainly approved of Chelsea's relationship with Adam Newman because of his wealth. In 2014, Jeffrey's grandson, Connor, was born. Originally Connor's father was believed to be Dylan McAvoy, but it was eventually revealed that Adam was Connor's father. In early 2014, Adam was presumed dead after a car wreck. Jeffrey snuck into Chelsea's apartment, took Adam's suit, and wore it. Chelsea was mad at Jeffrey because she felt she disrespected Adam's memory. Jeffrey hired Michael to help settle Adam's estate and Chelsea accused him of only wanting Adam's money. Jeffrey attended Connor's first birthday.

When Jeffrey learned that Dr. Ben Rayburn has operated on him using a false identity, he filed a lawsuit against him.

In 2016 it is revealed that Jeffery wasted all Gloworms money. He and Gloria are now seperated, but both now poor, the can not afford a divorce, so they are just separated. Gloria and the Fishers feel strong resentment and disgust towards Jeffery 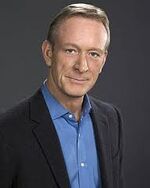 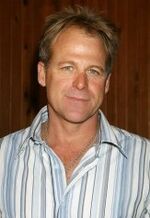 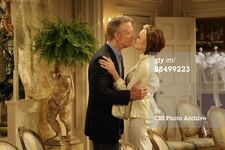 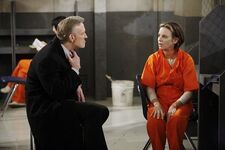 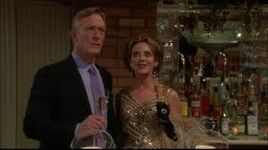 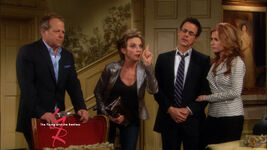 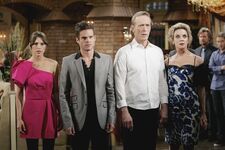 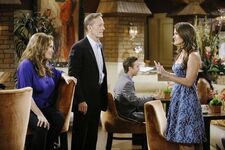 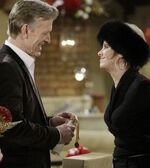