Leanna Love was a writer, talk show host and journalist.

In 1987, Leanna was an obsessed ex-patient of psychiatrist Steven Lassiter. He married Ashley Abbott. During Ashley and Steven's honeymoon in Hawaii they were stalked by Leanna, a former mental patient of Stephen's who fantasized that she and Steven were lovers. After Leanna made several attempts to murder Ashley with a poisoned lei, Ashley spent most of her honeymoon sick. Ashley never found out about Leanna's connection to Stephen nor that Leanna had tried to murder her. Leanna started stalking the newlyweds.

Leanna followed them back to Genoa City and abandoned her obsession with Stephen once she got involved with Jack Abbott, the arch-nemesis of Victor Newman. Jack arranged for Leanna to write a sensational tell-all biography of Victor under the pseudonym of Nora Randall entitled Ruthless: The Victor Newman Story. Victor had also hired her to write an authorized biography of his life, under the pseudonym Kelly Carpenter. Leanna was ambitious and obsessed and that grew with her wanting money and fame. Leanna's sensitive side emerged multiple times.

Without Jack's knowledge, Leanna added an extra chapter to Ruthless that exposed Ashley's affair with Victor, including Ashley's subsequent abortion and nervous breakdown. Victor's ex-wife, Nikki Newman, who was pregnant with Victor's baby, hoped that they would eventually resume their marriage. But when Ruthless was published, Victor assumed that Nikki was the one to give "Nora Randall" the information about Ashley's abortion (an assumption that was true) and quickly divorced her.

In a surprising move, Victor took Leanna with him in his private jet. He was still angry and and still unaware that Leanna had written Ruthless. He told the pilot to 'head west' and later returned to Genoa City married to Leanna. Victor married Leanna, in order to prove the press that he did not divorce Nikki in order to marry Ashley. Victor decided to stay with her, even after he found out their marriage wasn't legal because his divorce from Nikki was not final. On her own, Leanna used her wiles to land a job as an advice columnist for the lovelorn at a publication owned by Victor using the pen name "Leanna Love".

Because Leanna felt guilty about the expose novel and had come to genuinely care for Victor, she wrote another book called Victor Newman - Man and Myth under her real name. When Victor learned that Leanna and Jack had been lovers, he realized Leanna had written Ruthless. Victor publically fired her from his company and sold the publication, then divorced Leanna and remarried Nikki. Meanwhile, Victor devised a plan to punish Jack for his role in the publication of Leanna's book about Victor's life.

Victor orchestrated a takeover of Jabot Cosmetics, displaced Jack and made Brad Carlton his superior. Victor and Leanna soon divorced and Victor married Ashley. With the help of long-time admirer and friend of Victor, Douglas Austin, Leanna created the "I Hate Men Campaign" rallying wronged women everywhere. A year later, Leanna had forgotten about being a man-hater and competed with Jill Foster for Rex Sterling's affection. Rex became interested in Leanna but used the name Roger Bingham with her.

A year after that, Leanna and Jill fought over John Abbott.

In 1998, Victor was divorcing Diane Jenkins. Diane's scheming lawyer, Michael Baldwin, arranged for Diane to appear on Leanna's nationally syndicated gossip talk show, The Leanna Love Show, in order to gain public sympathy for the settlement hearing. Diane was surprised when Leanna revealed she was also once married to Victor. Still bitter over Victor's treatment of her, Leanna was happy to oblige. When Victor tuned in to the show, he was outraged that Diane had exposed his personal life.

Victor suffered business setbacks after Diane's appearance, but gave her what she wanted to get rid of her. As revenge for this, Victor tricked Leanna into selling him The Leanna Love Show, and then fired her.

In 2006, Leanna, now a journalist, returned to Genoa City to interview Ashley, who was being charged with the murder of Tom Fisher. (In reality, Ashely was covering for her amnesiac father, John Abbott.) Leanna lied to Ashley that she would paint a flattering picture of her, but instead, made Ashley look guilty.

Leanna returned once more in 2007 to conduct an interview with David Chow about the death of Carmen Mesta. 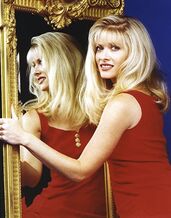 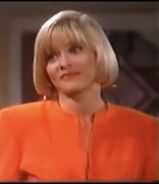