Lola Rosales is a resident of Genoa City. She has been portrayed by Sasha Calle since September 14, 2018.

Lola moved to Genoa City, and went to live with Arturo. Arturo's girlfriend Abby Newman found Lola's bra and mistakenly believed Arturo was two-timing her, but he quickly clarified. Lola was working from her food truck when Kyle Abbott came to order. He and Lola had some playful banter while Kyle waited for his food. Lola then met with Arturo and met Abby as well. Arturo explained to Lola that Rey was in town and said he can’t stop her if she wanted to have a relationship with Rey. When Rey stopped by Lola's food truck, she was put off by Rey's micromanaging attitude, feeling as if he was treating her like a child. Lola wanted to reconnect with Rey, but also wanted to get Arturo to reconcile with him. She arranged for Rey to meet with her while she was visiting with Arturo. Later, she and Arturo helped Rey move into his new place.

Rey's ex wife, Mia, arrived in November. She wanted to reconnect with Rey, and though Lola was resistant to her at first, she eventually warmed up to her and accepted Rey and Mia's reconciliation. Abby got Lola a job working as the head chef at a restaurant that she and Devon Hamilton were opening up. Once Lola and Kyle started officially dating, Lola revealed to Kyle that she was virgin and wanted to wait to have sex. Kyle was taken aback, but respected her decision. Lola soon found herself going up against Kyle's ex Summer Newman, who wanted Kyle back. At the same time, Fenmore Baldwin showed some interest in Lola, but she did not reciprocate since she was already in love with Kyle. One day, while on a triple date with Summer, Fen, Mariah, and Tessa, Lola accidentally revealed to them that she was a virgin, and Summer used this information to her advantage.

When Kyle bought Lola a purse, Lola was happy until she learned that it was an expensive purchase. Lola got mad at Kyle for getting her an expensive gift, and when Kyle tried to reconcile at Devon’s New Year's party, she got so angry that she kissed Fenmore at midnight. Kyle and Lola got back together, but Summer was determined to have Kyle. As the restaurant got close to opening, Lola became busy and overwhelmed. She got annoyed with Kyle for planning a trip at the Abbott cabin when she was so swamped with work. She told Kyle they were just too different and should go their separate ways. A heartbroken Kyle went to the cabin alone to wallow. Then Mariah made Lola realize what a mistake she had made. Worried she might lose Kyle, Lola pleaded for Jack to tell her where to find him, and admitted this was her first serious relationship. Forgiving of her mistakes, Jack gave her the cabin's address.

On the night of Valentine's Day, Lola is attacked by Mia and falls into the Abbott pool. Kyle is the one who finds her and saves her life. After his attempts to revive Lola fail, Kyle becomes frantic with fear. In the hospital, he remarks at how awful it was to find her like that, not knowing if she was dead or alive. Rey and Arturo want to keep Kyle away from visiting Lola in her hospital room, because before Lola's attack, Kyle had been kissing Summer at the cabin, which Lola saw. Her brothers are worried that if Lola wakes up and sees Kyle, it would be too stressful for her in her fragile state. It is agonizing for Kyle to stay away and he frequently sneaks in to see her. A month later, Lola wakes up to find that Kyle is married to Summer. However, he did that to ensure Summer would donate part of her liver to save Lola's life. Kyle tries to explain this to Lola, but Lola is convinced he still hadn't gotten over Summer.

Lola gets better and recovers from her surgery. Soon, she is well enough to start working at Abby's new restaurant, Society. Lola and Kyle manage to steal a few private moments together, despite how crowded it is on opening night. Kyle gives her a heart necklace, which is both a symbol of their love and a promise that they will be together soon. The restaurant is a huge success and everyone loves the food. Lola is happy that her culinary dreams have come true, but realizes that her life doesn't make sense without Kyle in it. It is very torturous for them to be apart, and Lola finds it hard to wait until Kyle is able to divorce Summer. Finally, he does, and she is free to be with Kyle. Before long, they are engaged and living together. Kyle is very excited to plan the wedding, and gets permission from Lola to spend big. For a while, everything is blissful in their lives, but the arrivals of Celeste and Theo put a damper on things.

As her maid of honor, Abby decides to throw Lola a bridal shower. When Summer crashes the party, Lola invites her to stay and the two have a civil conversation, despite their previous animosity over Kyle. Lola has shown a softer side towards Summer after she saved her life, and they even bonded over having unpredictable mothers. Everyone else is skeptical of Summer's presence, especially Abby who warns her to behave. Lola, however, expresses genuine concern over Summer, who is distraught over Phyllis' disappearance. Summer seems to appreciate Lola's kindness, making a speech about how she wants to move on and wishes Lola all the best. All the guests at the shower seem to think Summer is being sincere, which catches them off guard. Summer leaves, and they go back to partying with the shirtless waiters.

Unbeknownst to Lola, Abby arranged for a surprise guest to show up at the party. Lola is shocked when her mother appears out of the blue. Problems quickly arise, as Celeste expects to move in with Lola. Celeste doesn't know that Lola and Kyle are actually living together, assuming that step would come after marriage. Kyle hurries to remove his belongings from the apartment, as he wants to make a good impression on Celeste. Lola is also very stunned when Celeste hits on Kyle's father, Jack. Later, Mariah wants to film a video of Lola cooking to post online. Lola is initially against the idea because she is a private person and doesn't like being in the spotlight like that. Just when she finally musters up enough courage, Celeste comments about her daughter's drab appearance. Lola wishes her mother wouldn't criticize her, because she is very proud of what she accomplished.

Abby is someone Lola trusts, and goes to for advice often. Lola becomes worried, as Theo's presence in Genoa City raises questions about Kyle's troubled past. Abby advises her to drop it and appreciate the man Kyle is now, but something tells Lola to keep digging. Lola then meets with Theo and asks him to be honest with her about what went down in New York. After hearing his vague explanations, Lola is more convinced that she must know the truth. Theo refuses to reveal any more, so Lola goes directly to Kyle for answers. Kyle admits to hooking up with lots of women, and that he was using them as a way to escape. There was a certain numbness that appealed to him. It breaks Lola's heart to think of him that way, so burned out and jaded. Kyle remarks that on a random Wednesday he went to a food truck, and his life changed when a pretty girl smiled at him. Lola smiles.

At the coffee shop, while explaining his past to Lola, Kyle tells her that Theo's life is vapid and self-absorbed. Theo overhears and skulks away. When Theo sees Celeste, he introduces himself to her as Kyle's friend, casually mentioning how they kept each other out of trouble, or at least tried to. Celeste wants to know more, and Theo reveals the details about Kyle's time in New York, as well as his recent marriage to Summer. Meanwhile, at Society, Lola is already having a hard enough time processing what she learned, and admits to Kyle that she needs some space. Matters get worse when Celeste shows up, riled over what Theo told her. She doesn't see how Lola could possibly want to marry Kyle. When Lola and Celeste leave to talk, Kyle finds Theo and grabs him violently, furious at him for blabbing and causing problems between him and Lola. Vowing that Theo is dead to him, Kyle storms out.

Kyle becomes increasingly miffed at Theo and blames him for Celeste going back to Miami. Although gloomy about her mother's departure, Lola is looking forward to the joint bachelor-bachelorette party that Mariah offered to throw. After a run-in with Doctor Nate, Lola is reminded of how lucky she is to be alive, and decides to invite Summer. However, Lola quickly realizes this may have been a mistake. Two fights erupt at the party, one between Abby and Summer, and another between Kyle and Theo. Grabbing the microphone, Lola tells them all to cut it out and hopes that despite their complicated history, they can set their differences aside and go back to having fun. Wanting to make some new memories to replace the bad ones, Lola dances and poses for pictures with Mariah and Tessa. Kyle wishes that Lola could always be this happy, and recruits Jack to convince Celeste to return.

When Lola unexpectedly gets a letter from her father, she is torn up about letting him come to her wedding. She eventually decides against it, since she doesn't consider Adrian a true part of her family. He may be her father, but he is also a stranger, and has done nothing but disappoint her. Lola knows who her true family is and feels grateful to have Tessa, Mariah, and Abby in her life. They have supported her through thick and thin, and that is what truly makes a family. After they give Lola her pre-wedding presents, Lola has an emotional moment with Rey. She wants him to walk her down the aisle since he is the one that has always been there for her. Then, at the last minute, Celeste arrives to walk Lola down the aisle with Rey. Thankfully, Jack was successful in convincing her to return. In front of their loved-ones, Kyle and Lola get married, but the lovely celebration is soon marred by uninvited guests.

Against Lola's wishes, Adrian went to the wedding after all. Theo also crashes the event with Zoe Hardisty, an underage girl who got drunk at Kyle's party in New York. Kyle is uncomfortable because he doesn't want Lola to know about what happened with Zoe. Meanwhile, Rey tries to make Adrian leave, but Lola sees her father and is shaken up about it. Fortunately, Kyle and Lola are able to escape the craziness and have a wonderful honeymoon. They daydream about their future selves and what accomplishments they will achieve. Sadly, they return home to drama and disaster. Zoe feels hurt by Summer when she calls her a clingy kid. So, at the opening of Abby's hotel, Zoe spikes the sangria with drugs. This causes Summer to become so out of it that she kisses Kyle. Lola notices but is understanding, as Summer wasn't in her right mind and Kyle was taken by surprise. 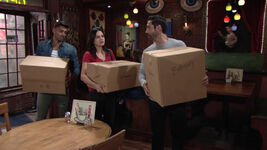 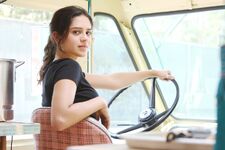 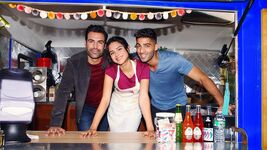 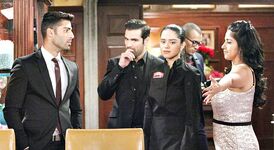 Add a photo to this gallery
Retrieved from "https://theyoungandtherestless.fandom.com/wiki/Lola_Rosales?oldid=54222"
Community content is available under CC-BY-SA unless otherwise noted.